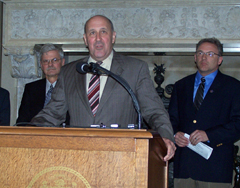 “We are trying to work very hard, and I'm going to work with the legislature as the full budget goes through, to understand really what is most important to us and make sure that our vital services are being met,” Doyle says. “Frankly, it means that people have wait in a line longer.” Doyle says the cuts in this bill are only a start: “the budget that I'm going to introduce on Tuesday is going to have very, very deep cuts.”

Forloughs for state workers remain an option. “I've said before, I think it's an option,” says Doyle. “I don't want to do that, and I don't have any current plans to do that. I hope that with the budget that I'm going to introduce, we're going to able to get through this.”

Doyle says the state's overall budget crisis – a shortfall in the current biennium of more than $5.7 million – has not been helped by the federal stimulus negotiations. “What the Senate did, and what they really have sort of forced the House to do, is going to be much more difficult for us.” The cuts announced by Doyle and legislative leaders will resolve just a portion of the budget gap.

Legislative leaders, Assembly Speaker Mike Sheridan and Senate Majority Leader Russ Decker , expect to have the legislation on the governor's desk by next week. They also say they'll have the state's biennial budget completed on time.

The cuts will include $500,000 by the State Legislature. The legislation prohibits any reductions to highway construction activities. It also reduces health care costs and expands access by securing $900 million dollars in new federal revenue through an assessment on hospitals, according to Doyle's office.