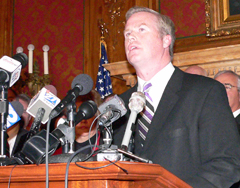 It was a "short speech and not very big on details," so says Assembly Republican Leader Jeff Fitzgerald (R-Horicon).

"It doesn't surprise me that governor Doyle is going to impose more taxes."

The Republican from Horicon says Governor Jim Doyle wants to raise taxes on a wide variety of goods and services, including downloaded music, capital gains, gasoline, income and cigarettes.

The income tax of 1% would be only for those individuals making $300,000 or more. Doyle does call for an assessment on Big Oil Company profits, and would jack up the cigarette tax by an additional 75-cents. Fitzgerald reminds voters that elections have consequences.

"The Democrats are in control of the Senate, the Assembly and have the east wing and there's nobody here to protect the taxpayers from them rolling these tax increases out."