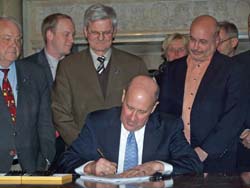 The bill was signed just four days after it was introduced. Doyle says such quick action was warranted so the state can take advantage of available federal funding.

The legislation passed the Assembly and Senate Wednesday with no Republican support. Doyle says GOP lawmakers just tried to make the debate as partisan as they could.