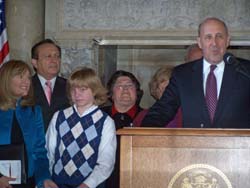 For many families, having a child diagnosed with autism can be emotionally devastating. Governor Jim Doyle says it can also take a massive financial toll because most insurance companies don't cover treatments for the disease. As a result, he says some families spend over $50,000 each year to pay for treatments. However, Doyle says many children go without treatment if their family can't afford the care.

Doyle wants lawmakers to act quickly on legislation that would require insurance companies to provide coverage for autism-related medical treatments. The Governor says it's needed to provide the care and support the children need and deserve, and also help relieve the financial squeeze on their families.

The Governor says requiring the coverage would also ease the burden on a state program that provides waivers to help families pay for treatment. The program currently has an 18-month waiting list, but Doyle estimates mandated coverage would help to remove at least one-third of those signed up right away.

The state Senate approved the bill last session, but Assembly Republicans blocked its passage. The GOP argued the state should instead focus on expanding the waiver program.

The legislation will receive a Capitol hearing next week.