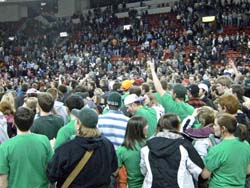 The UW-Green Bay Phoenix knocked off the 11th ranked Butler Bulldogs 75-66 in front of the largest crowd of the season (6,978) at the Resch Center in Green Bay.

Green Bay coach Tod Kowalczyk said he doesn't consider this an upset, but the Phoenix had never beaten a team ranked as high as this and hadn't beaten a ranked opponent since 1998.

Butler knocked off the Phoenix 11 days earlier, 68-59 at Hinkle Fieldhouse.  This time, the Phoenix (18-6 overall, 10-2 Horizon League) made sure Butler
(19-2, 10-1) wouldn't complete the sweep.  It ended Butler's 9-game win streak over the Phoenix and ended the Bulldogs 21-game conference winning streak.

Green Bay committed just 4 turnovers and hit 32 of 35 free throws.  Ryan Tillema had 21 points and Troy Cotton 19 for the Phoenix, who trail Butler by just a half-game in the league standings.  Green Bay hosts Milwaukee on Saturday at the Resch Center.