You are here: Home / Brewers / Looper agrees to deal with the Brewers 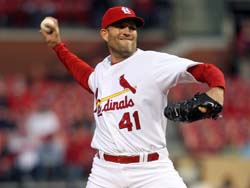 The Milwaukee Journal Sentinel is reporting that the Milwaukee Brewers reached agreement on a one-year deal with right handed pitcher Braden Looper.  The story also says there could be a one-year option in the deal as well.

Brewers general manager Doug Melvin said there were still some details to be finalized, but he was optimistic a deal would get done.  The Brewers can't make the deal official until Looper passes a physical.

The 34 year old Looper is expected to receive a 2009 salary in the neighborhood of $5 million.  He went 12-14 with a 4.16 ERA in 33 starts for the Cardinals last season and pitched 199 innings, which would have led the Brewers staff.  Looper's arrival in Milwaukee likely means that Seth McClung will be headed back to the bullpen for the Brewers.