You are here: Home / Crime / Courts / No plea deal for Saratoga kidnapper 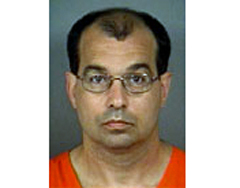 A spokeswoman for the D-A said neither side was able to reach a deal. Lanphear's attorney was not immediately available for comment.

Prosecutors say Lanphear kidnapped a 23-year-old man and a 21-year-old man in July, chained them at his house and sexually assaulted them.

Police arrested Lanphear after one of the man escaped and ran to a nearby house.

Lanphear has pled not guilty to 13 felonies.