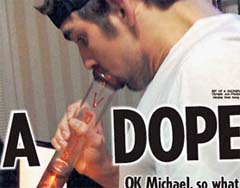 Michael Phelps tokes up . . . should we care? An image of the Olympic gold medal swimmer taking a bong hit is all over the media.

“Hyperbolic and hysterical” is how Gary Storck with the Madison chapter of NORML characterizes the coverage. “Three out of four college students have used marijuana,” says Storck. “It's nothing out of the ordinary. I think the most egregious part of it is whoever snapped his picture, and violated his privacy like that.”

Storck says it's past time to decriminalize marijuana in Wisconsin. “We have a 5-point-4 billion dollar budget deficit,” he notes. “Can we continue to enforce marijuana laws, where we're targeting people for small amounts and putting them in jail? I don't think a lot of people understand that a second offense for cannabis in Wisconsin, any amount, is a felony.”

Storck notes that cannabis is not a performance enhancing drug, and Michael Phelps apparently tested clean for the Olympics. In a statement, the 23 year-old Phelps said his pot smoking “was regrettable and demonstrated bad judgment.”