You are here: Home / Brewers / Sheets may need surgery 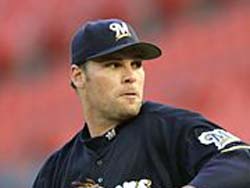 Brewers assistant general manager Gord Ash told mlb.com that the team is in discussions with Sheets' agent and officials from Major League Baseball about who would pay for the procedure.

Sheets had reportedly reached a 2-year deal with the Texas Rangers last week and only a physical stood in his way.  Since the injury was discovered, it appears the Rangers are no longer interested.