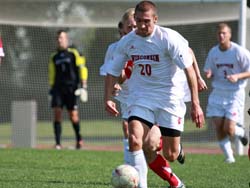 Wisconsin men's soccer player Aaron Nichols (pictured) got a chance to use some of his old high school football skills when he tackled a fleeing crook in downtown Madison.

The sophomore defender on the Badger men's team, was walking home last week when he noticed a suspicious man franticly running down Gilman Street in downtown Madison..  The man was being chased by a worker from Sports World on State Street.  He had allegedly run off with a jacket valued at $350.

Nichols asked the woman if the running man had stolen something and she said yes.  He quickly chased the man down and tackled him, holding him down until police arrived.