You are here: Home / News / Wow! What a Super Bowl 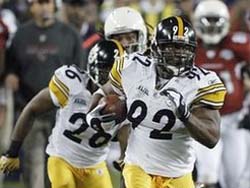 Sunday's Super Bowl 43 will go down as one of the best of all-time.  Pittsburgh went in as a 6+ point favorite and had to come from behind to win it 27-23 and become the first team in NFL history to win six Super Bowls.

Super Bowl MVP Santonio Holmes made a brilliant 6-yard catch in the corenr of the end zone with 35 seconds left for the winning score.  Holmes finished with 9 catches for 131 yards.

Pittsburgh actually led 20-7 in the fourth quarter, but Kurt Warner and the Cardinals rallied to go ahead 23-20 when Warner connected with Larry Fitzgerald for a 64-yard touchdown strike with 2:37 left to play.  Warner threw for 377 yards and three touchdowns on the day.  He also tossed an interception when he was picked off at the goal line by Pittsburgh linebacker James Harrison (pictured), who returned it 100 yards for a touchdown.

Following Warner's go ahead touchdown in the fourth quarter, Ben Roethlisberger engineered a 78-yard drive to win it.

The Steelers broke a tie with Dallas with their sixth Super Bowl title.

Bill Scott's observations:  The game had a tremendous finish, just think how exciting it would have been had the penalties been cut down.  The two teams combined for 18 penalties, 11 by Arizona for 106 yards.

After all of the penalties and play reviews, why wasn't the last play reviewed longer by the replay booth.  It appeared Kurt Warner's arm had started forward before he lost control of the ball.  I could be wrong on that, but with the game on the line, more attention should have been paid to that particular play.

Why did the officials not throw a flag at the end of the first half when James Harrison was tackled by Larry Fitzgerald.  Fitgerald came from out of bounds and was an ineligible tackler.  Without the flag, had it been ruled that Harrison was down, short of the endzone, the half would have ended.

Kurt Warner may have only one Super Bowl Championship, but remember this.  He had a lead before Tom Brady came back to beat him and yesterday he had the lead on Ben Roethlisberger before Roethlisberger brought the Steelers back for the title.

My kids were sitting on the couch making fun of "The Boss" at halftime.  I thought Bruce Springstein doesn't have the voice he used to, but I still enjoyed it.  He brought some energy to the halftime show.  Around the office this morning, apparently the younger generation just doesn't appreciate the music of my time.

The Doritos commercial with the Crystal Ball gets my vote for commercials, but overall, many of them were lacking.  What I really find hard to believe is how a company can spend so much money producing and paying for an add in the Super Bowl and then leaving me in the dark as to what product they're actually endorsing.

The game may not have featured teams that I would call my favorites, but that was soon forgotten.  This game had everything a football fan could have wanted, and then some.