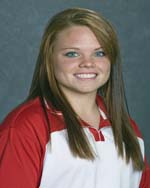 The Wisconsin women's hockey team advanced to a record 4th straight NCAA Frozen Four Championship after a dominating 5-1 win over Minnesota-Duluth in Friday's semifinals in Boston.

Erica Lawler (pictured) and Hillary Knight scored 2 goals each to lead the Badgers (33-2-5).  Wisconsin collected 4 power play goals in the win.  The Badgers have previous NCAA Championships in 2006 and 2007.  They finished runnerup a year ago.

The Badgers will take on Mercyhurst in Sunday morning's championship.  Mercyhurst will play in the title game for the first time ever, knocking off Minnesota 5-4 in the semifinals.