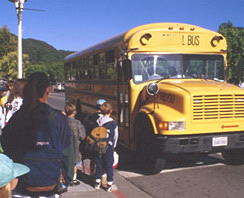 School buses can be a loud and distracting environment, and State Senator Tim Carpenter (D-Milwaukee) says drivers shouldn't be adding to that environment by talking on a cell phone while driving their routes.

Carpenter is sponsoring a bill that would ban drivers from using a cell phone for non-emergencies, while they are carrying children. Under the legislation , violators would face fines starting at $200. Repeat offenders could lose the "S" class on their license, which allows them to drive a school bus, for up to six months.

Carpenter says most responsible school bus drivers should be able to avoid talking on a cell phone while carrying children. However, the easy accessibility to the devices may be too tempting for many of them. He says it's not worth risking the life of children by allowing their continued use.