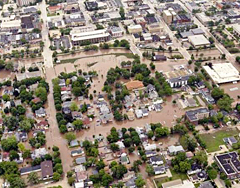 The water table in parts of Wisconsin is above normal and Wisconsin Emergency Management warns some areas could have heavy flooding this spring.

“Right now many creeks and rivers are running high. The ground water table is very high. And the national weather service feels that with some heavy spring rains we could be back to flooding as we were last year.”

We've experienced historic flooding events in the past two years, now Lori Getter and emergency officials want to make sure residents are ready in case we're in store for more flooding. Getter says a typical homeowner's policy does not cover damage from floods, and not many flood victims qualify for federal disaster assistance. And Getter stresses, even if you do get money from the government, it's never enough.

“Federal disaster aid, whether it's grants or low-interest loans is not designed to make you where you were before the flood. It's designed to help get you through. So people had to deal with a lot of additional losses and deal with those costs.”

Thirty counties in southern Wisconsin qualified for federal disaster relief last year, with flood damage estimated at $765-million. But, Getter emphasizes, that money is a fraction of what's needed, that's why flood insurance is important – and you need to do it well in advance.