You are here: Home / Environment / Conservation / Cougar spotted near Spooner 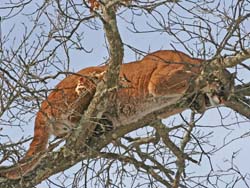 The Department of Natural Resources is on the trail of a mountain lion spotted in Northern Wisconsin, near the city of Spooner.

Department of Natural Resources wildlife supervisor Ken Jonas has been heading up the search for the big cat. Officials want to capture the cougar so they can put a radio collar on the animal. Jonas says that would allow them to track its movements and learn more about where it may be heading eventually.

But so far, they've had little luck. Jonas says the cougar has been treed three times by search crews using hounds, but there was no way to safely capture it afterwards.

Jonas says the adult male appears to be in good health and is shying away from human contact. He says there's no reason to believe it poses any risk to people living in the area.

Officials believe the cougar like came from the western states or Canada, much like several others in recent years that have been spotted in the Midwest. The last sighting of a mountain lion in Wisconsin was last year near Janesville. That animal was later shot and killed after it wandered into the Chicago area.