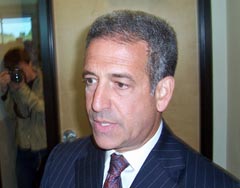 Senator Russ Feingold has fired off a letter to Treasury Secretary Timothy Geithner, asking what can be done to halt the bonuses being paid to AIG executives and employees. It's been reported that the insurance giant will pay about $165 million in bonuses out of the $170 billion in bailout funding.

“I'm outraged,” Feingold said prior to a listening session at Brass Community School in Kenosha Monday. “Usually bonuses are only required when somebody did a good job, rather then when they did a lousy job, which appears to be the case here.” Feingold said he learned of the bonus over the weekend.

Feingold said he was also shocked to learn some of the federal funding received by the company went to foreign banks. “Maybe there's a justification for that, but it seems kind of weird in terms of American taxpayer dollars,” said Feingold. “I didn't vote for the bailout in the first place, because I didn't think there was adequate oversight. And now we're seeing the problem.

Feingold said he wants to know if there's a way to end the bonuses. “I think maybe a lawsuit that challenges these bonuses may be appropriate,” he said. I want to find out what the legal basis for that is.” Feingold says the public needs to know whether or not AIG was legally required to pay the bonuses. “We want AIG to cough up the facts,” he said.