You are here: Home / News / Immigrant rights rally at Capitol 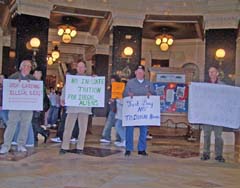 Those in support of rights for undocumented immigrants are calling on a few changes to the Governor's proposed budget.

Carl Klessig, a fifth generation dairy farmer in Manitowoc County, says he and many of the 130,000 Wisconsin farmers in his industry support immigrant causes. He says the average dairy farmer employs "one if not several" first generation immigrants.

"Why should these people be granted some sort of special privilege when we have millions of people waiting in line to come to this country," asks FAIR National Field Director Susan Tully.

Hundreds organized by  Voces  De La Frontera filled the capitol Wednesday to also celebrate a provision in the proposed budget that would grant in-state tuition to the some undocumented college students.