You are here: Home / News / Legislation would encourage RTAS 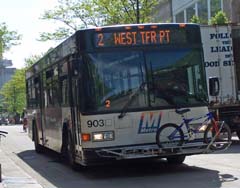 Proposed legislation would allow establishment of regional transit authorities across Wisconsin. Right now there are none, although Governor Jim Doyle's budget includes funding for three, in Milwaukee, Dane County and Kenosha-Racine.

State Senator Judy Robson chairs a Legislative Council committee that's prepared a bill to allow local governments to form RTAs. “They would also have the authority to raise the sales tax,” said Robson. “We gave them as much as a half percent sales tax in order to fun regional transportation,” which could include bus service, van pools, even commuter rail. The legislation gives local governments flexibility: communities on the border, like Kenosha and Superior, could contract outside the state for services.

Robson concedes not everyone's on board. “There are naysayers that say we shouldn't be spending money on this,” she said. “But if we have any vision about economic development and growing our state, we need to have mass transit, especially commuter rail.” The next step for the bill could be public hearings in the Assembly and Senate transportation committees.