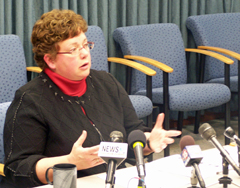 In her first significant action since taking the helm at Wisconsin's flagship university, UW Madison Chancellor Biddy Martin has announced a new initiative, which she calls a major effort to preserve the quality of an education there, and improve its affordability.

The initiative proposes a supplemental tuition charge, with proceeds to used for hiring faculty, and to make the university more affordable to students from low to moderate income families. In-state students will by a $250 dollar annual supplemental tuition charge over four years, while out-of-staters would be on the hook for an additional $750 per year. Students from families making less than $80,000 will receive grants to pay the fees.

"I've listened to what students and alumni have to say, and I'm persuaded that we need to address the quality of undergraduate education right away," said Martin. Money raised by the tuition fee will go towards restoring about 275 faculty positions and additional instructional support that had to be eliminated in recent years, according to Martin.

"In addition, UW Madison has become less affordable than it should be, to low and middle income students and their families," said Martin. "It's difficult for families in the state of Wisconsin – where the median income is $62,000 – to afford a UW Madison education." Martin said the average family income of students at UW Madison is currently at around $90,000. "We need to be able to attract low and middle income students."

Asked how will students are likkely to react to the supplemental tuition charge, Martin said that depends on how it's presented: "if the focus is on the real purpose of the initiative, and its actual benefit to students . . . I think students will be excited about that."

Two campus forums have been scheduled to gather student feedback on the initiative. "I'll use all the feedback, as will the rest of the administration, regardless of what its content is, to inform what we're going to do," said Martin. "We really, genuinely want to know what students and other members of the community have to say. More information on the initiative is available on-line .