You are here: Home / Recreation / Entertainment / Reacting to snowmobile deaths 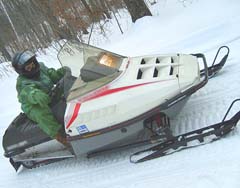 Can we do much, to save intoxicated snowmobilers from themselves? Fifteen of 23 snowmobile fatalities this season are attributed to alcohol, and Mike Cerny, chairman of the state's Snowmobile Recreation Council, wonders whether law enforcement needs more tools. “One of the problems we've seen over the years is that we're losing enforcement hour on the trails, compared to previous years, which definately bothers me.”

Up for discussion now between the snowmobile council and ATV and boating groups is a proposal for uniform penalties for all recreation vehicle users. Cerny said there's not much support for linking the first OWI on a recreational vehicle to driver's licenses

Along with the numerous deaths of drunk snowmobilers, the case of three men who used their sleds to kill deer has drawn a lot of media attention. Cerny says as far as public perceptions of his sport are concerned, the past winter has been the worst he's ever seen.

Cerny says unfortunately, public education only goes so far. “I think the DNR is doing about as much as they can,” he says, adding that a few outlaws are damaging the image of snowmobiling. “Local clubs are the choir, but it's hard to reach people who aren't involved in club activity.”