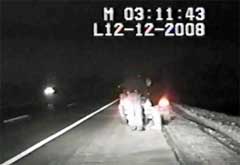 Efforts at the Capitol to crackdown on repeat drunk drivers are turning up another legislative proposal.

State Senator Alan Lasee (R-De Pere) is introducing legislation that would require anyone convicted of a second OWI offense to surrender the license plates from their vehicle for a period of 90 days. For the third offense, offenders would lost their plates for 180 days. After a fourth offense, the court could seize the vehicle and require it be sold.

Lasee says the measure would make it harder for a repeat offender to get on the road, since it would be illegal to operate the vehicle without license plates. If the offender went ahead and drove the vehicle anyway, the De Pere Republican says it would easy for police to identify them.

Lasee admits the proposal could be hard on families who share a vehicle with the offender, since it could not be on the road. However, he says it may get them to act on forcing the troubled family member to seek treatment so they don't re-offend again.