You are here: Home / Politics / Govt / Ryan aims to embarrass the pork out of DC 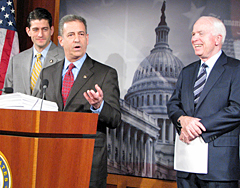 "Swine odor research might be important to somebody but when we have a $1.8 trillion deficit this year it's probably not the best use of taxpayer dollars."

Ryan says the legislation would enable the president to single out frivolous earmarks in bills awaiting his signature and send these specific items back to Congress, whose members would have to vote on whether to rescind, or cancel, funding for these provisions.

"We think the president wants this. We just have to get through the forces here in Congress like the status quo. And unfortunately there are forces from both sides of the aisle that like this kind of status quo."

The ranking member of the House Budget Committee says curtailing the waste is not a Republican or Democrat issue; it's a good government issue.

Ryan says the House passed 9,000 earmarks last week, totaling $7 billion. He says both parties have contributed to the mess.

"There are lists and lists and lists of items in this bill that if they actually stood up to a vote – if actually members of Congress had to vote on these things individually – they probably wouldn't stand the test of time."

Ryan is working together with U.S. Senator Russ Feingold, a Democrat from Janesville, and Republican Senator John McCain.

"Our goal is to embarrass the pork out of Washington."

Opponents of the measure say earmarks serve a purpose; a lot of money is used for things like public safety and infrastructure.