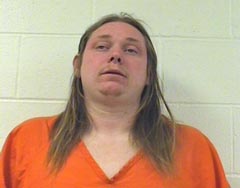 A Stratford man is charged with beating his girlfriend to death during a weekend fight. Prosecutors say Eric Mayer hit his girlfriend Cindy Tyler once in the head – dealing a blow that killed her hours later.

"He indicated that she kicked at him, and he became very angry about that, and so he hit her very hard in the head. She immediately went down and lost consciousness," said Marathon County District Attorney Jill Falstad, who has charged Mayer with felony murder as a repeater and with a domestic violence penalty enhancer.

"Because of the facts and circumstances and the information available at this point, the state believes there was not intent to kill," Falstad said of her charging decision. Falstad said fights like one early Saturday which led to Tyler's death don't need to happen. "There are other options for people. If there's a dispute walk away. Seek support and counseling, but don't stay in an abusive relationship. If an incident is happening, walk away. Don't strike the other person.