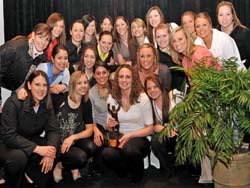 The Badger women's hockey team won their 3rd natonal title in four seasons with a 5-0 win over Mercyhurst in Boston on Sunday.

Goalie Jessie Vetter was named the Frozen Four's Most Outstanding Player after collecting her 14th shutout of the season and NCAA record 39th of her career in the title game.

There will be a championship celebration tonight at 6pm inside the Kohl Center.