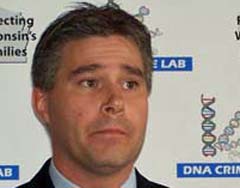 Wisconsin's attorney general is not pleased with Governor Jim Doyle's budget plan. In a letter to the co-chairs of the legislature's Joint Committee on Finance, Attorney General J.B. Van Hollen identifies no fewer than seventeen funding cuts or policy changes contained within Doyle's proposed budget, which he says shortchange public safety.

“It's very difficult to say that there are some that are most problematic, versus others,” Van Hollen says. “What we're trying to do in pointing out the seventeen unique concerns – and there are more that we didn't point out – is that the entirety of them points out the huge problem.” Early releases of felons, reduced GPS monitoring for sex offenders, and cuts to the district attorney budget are just three of the concerns identified by Van Hollen. “This is a very strong, anti-public safety, non-prioritized budget,” said Van Hollen, adding that Doyle has proposed cuts “at the expense of public safety.”

Asked if he'll prepare an alternative proposal to Doyle's Van Hollen says that's not his job, and it's up to the finance committee to show its commitment to public safety. “My proposal is, public safety is about the last thing that should be cut, and it's up to them to determine what are the least beneficial aspects of state government, and those are the ones they need to cut. There is hardly anything in the state budget that couldn't be cut, and have that money better spent on public safety.”