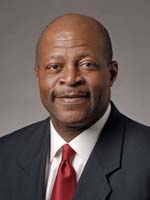 The Wisconsin football team is welcoming back former assistant coach Henry Mason.  Mason stopped coaching after a spinal cord injury in 2007.  He was coaching wide receivers at the time.  He'll become the Badgers' director of football player personnel and external relations.

Harris is unable to return after having back surgery but remains on scholarship.  Stallons is pursuing a transfer.  Bielema didn't give a reason for Hodge's departure, but said he is still expected to graduate.