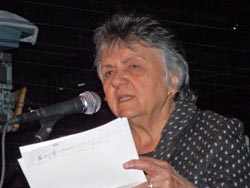 The Chief Justice of the Wisconsin Supreme Court has won her re-election bid.

During a victory speech to supporters in Madison Tuesday night, Abrahamson said voters were able to see past a campaign that attempted to use labels to mislead the public, and supported a campaign that stood by the ideals of Wisconsin.

Abrahamson also voiced her concerns about the impact of special interest spending on campaigns; a major factor in the two previous Supreme Court races. She says election campaigns are not a license to "appeal to dark angels."

In a statement, Koschnick congratulated Abrahamson on her win. The Judge said he knew he was an underdog in the race, but felt it was important for voters to have a choice.

Abrahamson's election to another 10-year term puts her just four years away from becoming the longest serving justice in the state Supreme Court's history.