You are here: Home / Health / Medicine / Brain-Twitter interface may be boon to disabled 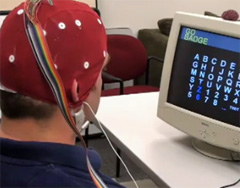 It's the latest social networking craze, but researchers believe Twitter may also someday help people with severe physical limitations. "SPELLING WITH MY BRAIN." That's a tweet UW Madison researchers sent out on April 15th, without touching a keyboard. Professor Justin Williams and doctoral student Adam Wilson are Twittering through an electrode embedded cap and a computer screen. Williams explains why the social networking site may be a boon for people with spinal cord injuries, and others with no mobility.

"Twitter, when we first started looking into it, really took care of a lot of the problems that we had had in trying to help people communicate," explains Williams. "It takes care of a lot of the 'overhead' of being able to communicate over the Internet." Williams says people who are 'locked in' could eventually benefit from the technology. "These are very chronic conditions that can last for many, many years, and over time, face to face communication becomes more difficult," Williams says, adding that Twitter would be a good method for quick messages to friends and family.

"Twitter was really the perfect application for something we'd been trying to do for many years: help people with severe motor disabilities communicate with the outside world," says Williams. "We'd been trying to help people use programs like e-mail, but of course with e-mail you have to be able to do a lot of tasks before you're ever going to be able to communicate with someone."

Willams and scientists at the Wadsworth Institute in Albany, New York are working to further develop what they call the Brain-Twitter Interface , which Williams believes may someday be available for use in homes and care facilities.