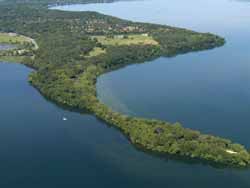 Legislation banning phosphorus in lawn fertilizer gets the governor's signature. State Representative Spencer Black says the Clean Lakes legislation he authored won't totally solve the problems of algae and weed growth in Wisconsin lakes – but it's a start. “In Minnesota, which has had a ban in place for eight years, in some the lakes they've studied, they've seen a measurable improvement in lake quality,” Black says. “It's almost astounding: one pound of excess phosphorus running off into the lakes can create up to 500 pounds of excess weed and algae growth.”

Black is a Democrat from Madison, where weed growth and algae blooms in the city's lakes have long been a serious problem for swimmers and boaters. “It's almost astounding: one pound of excess phosphorus running off into the lakes can create up to 500 pounds of excess weed and algae growth,” Black says. Of course, lawn fertilizer is not the only product containing phosphorus. “We're going to follow up this session with a ban on phosphorus in dishwashing detergent,” says Black, noting that several states already have such bans in place, and the industry is changing the formulation to eliminate phosphorus. Phosphorus is already banned in laundry detergent – a change Black helped bring about while working for the Sierra Club in the 1980s.