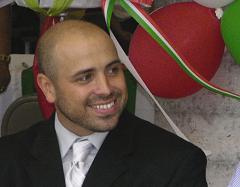 Students from the state's private colleges make their case at the capitol for more financial aid.

Jason Diaz is an Iraqi war veteran who currently studies nursing at Edgewood College. After being in the military for eight years, Diaz decided there's no better job for him than nursing.

"It's compassion, caring, you know, helping others when they can't help themselves, I'm mean, that's the very core of it and that's why I think it's a good fit for me."

Diaz started his education at UW-Madison, but he says the classes were too large, so he transferred to Edgewood, a private school.

"But the tuition at that school is a lot higher since it is a private university. Financial aid only covers so much; you know, scholarships only cover so much; ah, and then you have to make up the rest."

Without financial aid, Diaz says he'd have to quit college. He's married with twins on the way and has a full time job.

Under the state's GI Bill, Diaz qualifies for tuition remission equal to the cost at UW, but it's not enough to cover his private education.