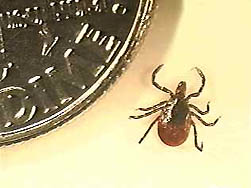 The tick which carries Lyme Disease appears to have spread across Wisconsin. UW Madison entomologist Susan Paskewitz found a deer tick on her dog in Madison last summer. Paskewitz says residents in places like Madison and Milwaukee can no longer assume they are deer tick free.

“They're moving closer to some of these large populated areas,” says Paskewitz , adding that wooded areas in eastern Wisconsin are now likely to have deer ticks. “Kettle Moraine, for example, we now know is quite infested with ticks.” In1994, a deer tick 'census' led by Paskewitz revealed they had already become established in the western two-thirds of the state. Since then, reports of Lyme disease and new infestations led Paskewitz to suspect that they have become prevalent throughout Wisconsin.

“It tells people who may have been a little bit relaxed, especially in the eastern one-third of the state, that they should pay attention now and be checking themselves, and their animals.” Paskewitz says this should also alert health care providers not to discount a diagnosis of Lyme's just because their patient lives in a supposedly tick free area.

Paskewitz says she was a little surprised to discover a deer tick on her dog last summer. She brought him home after a walk in her neighborhood near the UW Arboretum. “Sure enough, I was combing through his coat and found a deer tick there,” she says. “We're not exactly sure if that represents an established population, but the fact that there were a couple of others picked up this year really makes me suspicious, and I'm going to be keeping an eye out.”