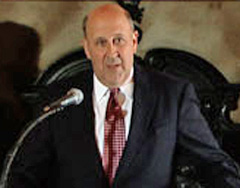 More cases of Swine Flu are detected as the governor declares an emergency in the state. Governor Jim Doyle declared a Public Health Emergency in Wisconsin on Thursday, in response to the presence of Swine Influenza A , or H1N1, in the state.

Doyle announced that two additional probable cases of the H1N1 strain have been detected in Sheboygan and Ozaukee counties, bring the state's total number of probable cases two five. Those new probable cases are in addition to one in Adams County and two in the city of Milwaukee, where four schools have been closed.

“We are fortunate to have so many great professionals at work in Wisconsin, and to have system of response in Wisconsin that is one of the best in the country,” said Doyle. The Governor noted that Wisconsin's system of response to pandemic flu has been rated among the best in the nation, according to the U.S. Department of Health and Human Services. “All of those preparations are going to be needed for us right now,” he said. “The public health emergency that I'm declaring today will give public health officials all the tools they need to respond to this challenge.

· Designates the Department of Health Services as the lead agency to respond to the public health emergency; and

· Directs the Department of Health Services to take all necessary and appropriate measures to prevent and respond to incidences of Swine Influenza A in the state; and

· Directs the Department of Health Services to access and distribute the state and federal antiviral stockpiles in response to the public health emergency as the State Health Officer determines is advisable; and

· Directs the Department of Health Services, as part of the antiviral response, to take any measure it deems necessary and appropriate to make an antiviral available to persons within the State, regardless of insurance or other health coverage, as needed to respond to the public health emergency; and

· Suspends the provisions of any administrative rule, if the Department of Health Services determines that compliance with that rule would prevent, hinder, or delay necessary actions to respond to the emergency and increase the health threat; and

· Authorizes the Adjutant General to utilize Wisconsin National Guard Direct personnel and resources as necessary and appropriate to assist in the State's response to the public health emergency; and

· Direct all state agencies of the State of Wisconsin to assist as appropriate in this ongoing response.

Doyle said he doesn't expect that the National Guard will be needed, except to move antiviral medications around the state. “But, this emergency order gives the Adjutant General the authority, if the situation worsens and we need more help.”

“We don't know what kind of challenge faces us in the next few days and the next few weeks,” said Doyle. “I think we all hope that the warm weather comes and that this strain of flu dies away, and what we have are some relatively mild cases of the flu.” Doyle urged local officials and schools to communicate with their local public health agencies.

State Health Officer, Dr. Seth Foldy, said flu fighting antiviral drugs should be taken only in a limited number of circumstances. “If they are cases, if they are close contacts, and a very small number of other situations,” said Foldy. “It is not necessary for people in the state to think that they need to have medication today, or to worry about their ability to access this.”