You are here: Home / Recreation / Entertainment / Ducks back on Delton 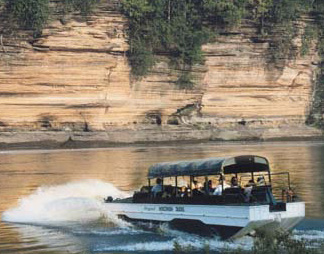 The " Original Wisconsin Ducks " are again splashing into Lake Delton, another sign that the lake is back, ten months after a shoreline breach during heavy rains drained its water. General Manager Dan Gavinski says the first trip happened Thursday afternoon. The driver and the people riding on the vehicle were "excited to be the first ones to go onto the lake."

Gavinski has been gauging the water level for the past few days and claims the depth right now is about two feet shy of its normal summertime level. Lake Delton should be completely refilled by the end of next month. However he says almost all the activities can take place on the lake.