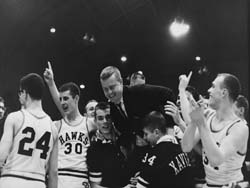 The man who started the football and basketball programs at Xavier High School (Appleton), died yesterday at the age of 80.

Gene "Torchy" Clark won 86% of the football games he coached and an even more impressive 89% of the basketball games, including a private school championship in 1963.

Xavier High School named their gym after Clark.  Central Florida University in Orlando did the same after Clark started the basketball program there and transformed it into a Division II national power.