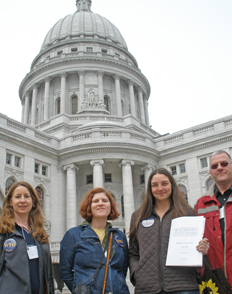 Republican Glenn Grothman (R-West Bend) says "it's not surprising that young children who know nothing about life" want more money. He says the kids should be happy with what they're already getting.

"Quite frankly, it's unconscionable, as people get laid off or being told they have to take cuts in pay, for Governor Doyle and certain members of the state legislature to increase scholarships by 40% in two years!"

One argument is that we need to help students, who will eventually get jobs contributing to the economy and communities. One student says without more financial aid, he'd have to quit college. Grothman isn't sympathetic, saying we all could use a little more money.

"I wonder how many taxpayers in the next two years expect a 40% increase in anything."

Whether the amount of financial aid is increased or not, advocates say the percentage should be the same across the board — from the UW System to the private colleges to the tech schools. Does Grothman least agree with that?

"No. We can't give every line in this budget a 40% increase. They should be grateful for the small increase they're getting."

While at the capitol, students met with lawmakers to talk about current issues, funding, and other priorities.