You are here: Home / News / Kelly wins in New Orleans 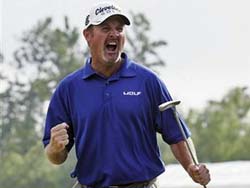 It's been a long time for Jerry Kelly, but the Madison golfer finally won again ont he PGA Tour .  Kelly entered the final day of the Zurich Classic of New Orleans with a 3-shot lead and shot a 1-under par 71 to pull out a 1-shot win over Rory Sabatini, Charlie Wie and Charles Howell the third,  finishing 14-under par.

It was years ago that Kelly was so confident in his game that he boldly predicted he thought he'd give Tiger Woods a run for his money.  But Kelly's game had fallen on hard times and his win Sunday was Kelly's first since his 2002 win at the Western Open.

Kelly has spent a lot of time working on his swing with his brother-in-law Jim Schuman, who just happens to be the University of Wisconsin golf coach.

It's great to see Kelly back in the winners circle.  He's a great guy, the kind of player you can really cheer for.  His good friend and fellow Madison golf star Steve Stricker represented Wisconsin well this weekend.  Stricker finished tied for 7th on Sunday.