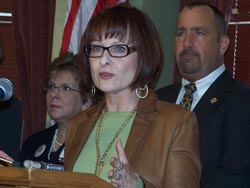 A state lawmaker is reviving a proposal to increase Wisconsin's beer tax.

The Legislation from State Representative Terese Berceau (D-Madison) would increase the tax on beer by just under three cents a bottle. Money from the tax would be used to pay for law enforcement and alcohol abuse treatment programs.

Berceau says Wisconsin has a nationally known drinking problem, but the state is not dedicating the resources or reforms needed to address the problem. She says the tax would allow beer drinkers to cover some of the costs brought on by alcohol use.

Opponents of the plan say it would lead to a significant increase in the cost of beer around the state. However, Berceau says you'd have to drink a six pack a day to see beer costs go up by more than a dollar a week. The Madison Democrat says those drinking that much are already part of the problems facing the state due to alcohol abuse.

The Wisconsin Tavern League says the proposal would also reduce beer sales across the state, at a time when many businesses are already having a hard time keeping their doors open and getting customers to come in. Berceau calls that a “false argument” and says her research has shown alcoholics are not price sensitive and won't be purchasing less beer.

Wisconsin currently has the third lowest beer tax in the nation, which has not been increased since 1969.