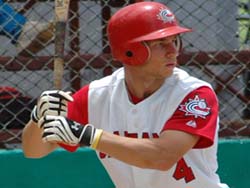 The Wisconsin Timber Rattlers released their 2009 roster today.  The infield is led by the Brewers 1st round pick in the 2008 draft (16th overall), Brett Lawrie (pictured).  After signing with the Brewers, Lawrie participated with the Canadian National Team in the 2008 Summer Olympics in Beijing, China.  Lawrie was drafted as a catcher, but is making the transition to second base, where he'll debut for the Timber Rattlers.

Outfielder Cutter Dykstra was a 2nd round pick of the Brewers in 2008.  Dykstra is the son of former Major Leaguer Lenny Dykstra.