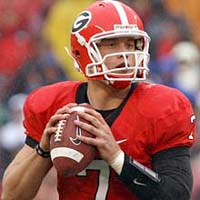 The Detroit Lions made Matthew Stafford the first overall pick in the 2009 NFL Draft today.

Commissioner Roger Goodell announced the opening of the draft and the Lions had the card up to him seconds later.  The Lions and Stafford had already come to terms prior to the draft.  It's a 6-year deal worth $78-million with $41.7 of it guaranteed.  The remainder of the amount is incentive based between playing time and Pro Bowl appearances among other things. Video of Stafford in action.