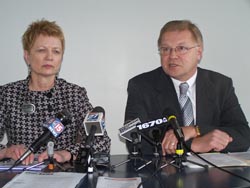 The Department of Consumer Protection is out with its annual list of the top ten complaints filed with the office during 2008.

Division Administrator Janet Jenkins says telemarketers rung up over 2,000 reports, once again claiming the top spot on the list last year. Complaints against telemarketers have been at number one since the “ No Call ” list was created in 2003.

Second on the list were complaints about landlord-tenant disputes. Jenkins says the third spot is filled by problems with telecommunications companies, with many of those issues having to due with billing problems.