You are here: Home / Packers / Packers add fullback in 5th round 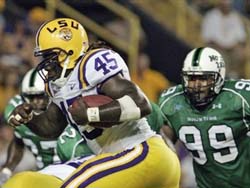 The Packers already have two fullbacks on their roster in John Kuhn and Korey Hall.  They added a third in the 5th round of the NFL Draft today, selecting LSU's Quinn Johnson.

Johnson is a converted linebacker, who made the transition to fullback prior to the 2006 season.  Johnson loves to hit and turned out to be a perfect fit at fullback for the Tigers.  He ranked second on the team with 11 touchdown resulting blocks in 2008.

Johnson scored all three of his career touchdowns in the 2008 season.  His career rushing average is 2.13 yards per carry on 16 carries.