You are here: Home / News / Packers select offensive lineman in round 4 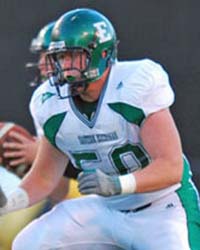 The Green Bay Packers used their first selection on day 2 of the draft (#109 rd. 4) on an offensive lineman.  The Packers went with offensive tackle TJ Lang, a player that played his first year in college as a defensive tackle, then made the transformation to the offensive side in his last three seasons.

Many professional scouts feel that Lang's drive blocking ability might be better suited for guard or center in the NFL.

Since changing positions, Lang went on to start 36 consecutive games, including his last 26 at left tackle.