You are here: Home / Business / Pro-environment and prosperous 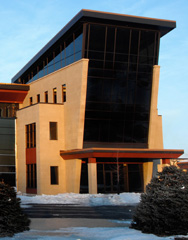 Governor Jim Doyle took an Earth Day trip to Manitowoc for the opening of Orion Energy System's New World Headquarters, a 70,000 square foot technology center.  Doyle says he's unsure if even Earth Day's founder, former Wisconsin politician Gaylord Nelson, could've forseen the environmental and economic opportunities that Wisconsin businesses have learned to take advantage of.  The Governor says Orion has been our shining light and is an example of what we can build on in Wisconsin.

Neal Verfuerth, Orion's President and CEO, says the facility will help save energy, save customers a lot of money and reduce impact on the environment.

Kevin Crawford, former Mayor and Orion VP of Business Development and Government Relations, says the building will bring lots of young people in who will learn about energy efficient solutions and ways to apply them when they grow up.

Manitowoc Mayor Justin Nickels says Orion's growth is extraordinary. He called it an “honor” to stand before a company that only a couple of years ago had one employee and now has hundreds.