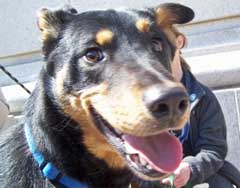 For a state which critics often decry as one of the most over regulated in the nation, Wisconsin has long had a laissez-faire attitude towards dog breeders. A bipartisan group of lawmakers, hoping to change that, on Thursday announced a bill to regulate commercial dog breeders in the state. State Senator Pat Kreitlow (D-Chippewa Falls) thinks legislators have finally come up with a workable bill. "We're very optimistic that we've crafted a package that not only reduces or eliminates the bad actors who are motivated solely by profit, but protects and even strengthens the value of responsible dog breeders who's livelihoods are threatened when puppy mills multiply," Kreitlow said.

The bill requires breeders selling over 25 dogs a year to be licensed and maintain standards of care. It also applies to pet stores animal rescues and auctions. State Representative Jeff Smith (D-Eau Claire) said it's all about consumer protection. "Many of us have known people who have gone with great trust and faith and bought a puppy . . . where the dog breeder doesn't even want them to see the facility where the puppy's coming from," Smith said. "Down the road much of the promises made about their puppy are not true, and they're not able to do anything about it."

The legislation also applies to pet stores animal rescues and auctions. Smith, who's attended two dog auctions in Wisconsin, said "there's got to be something very wrong when they're checking you at the door to make sure you don't have a cell phone or a camera to record what they're doing."

State Senator Alberta Darling (R-River Hills), who's worked on the issue for a decade and has had two policy provisions, that would have regulated dog breeders, vetoed out of state budget bills, said it's time for the state to get serious on the issue. "Let's get some protection for these little guys," said Darling, referring to a pair of dogs from the Humane Society of Dane County who were on hand for Thursday's press conference outside the Capitol. "And let's make sure that people around the country aren't saying that Wisconsin is still open for business for puppy mills."