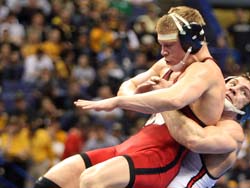 Wisconsin Badger freshman Andrew Howe (pictured) has been named the 2009 College Wrestler of the Year for 2009 by Rev Wrestling.

Rev Wrestling is one of college wrestling's premier wrestling websites.  The award is voted on by RevWrestling.com writers and executives and Howe was the unanimous choice by receiving all eight first place votes, for a total of 72 votes.  Minnesota's Zach Sanders came in second with 33 votes.

Howe missed the early portion of the season due to an injury but came back to finish the year 30-5, finished with a perfect 13-0 dual mark and went 8-0 in the Big Ten dual season.

The Cedar Lake, Ind., native continued to make a name for himself at the 2009 Big Ten Championships and became the first true freshman under head coach Barry Davis to win an individual title.  Howe went 4-0 at the tournament to win the title and garner Big Ten Freshman of the Year honors.

He then competed in his first NCAA tournament and as the No. 2 seed, made it all the way to the finals.  Howe had a 19-match winning streak before facing Edinboro's  Jarrod King in the championship bout.  Howe lost that title match 3-2 (picture).

His second place finish at the NCAA's marks the highest finish of any Badger freshman since Donny Pritzlaff placed sixth at 150 lbs. in 1998.