You are here: Home / Crime / Courts / Sad anniversary at UW 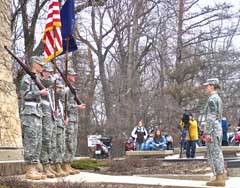 The University of Wisconsin remembers one of its own, on the one year anniversary of her murder. Brittany Zimmerman’s family was present as the Carillon Tower bells on the Madison campus tolled 21 times in memory of the 21 year-old Marshfield woman who was murdered in her off campus apartment a year ago.

“When parents send their children here, they send them here with a sense of great hope and expectations,” said Associate Dean of Students Kevin Helmkamp. “To have that taken away so violently . . . it’s tremendous sadness when that occurs. In a way, you never get over that.”

Helmkamp said the one year anniversary is a difficult one. “I don’t know the words, in all honesty,” said Helmkamp. “I think it’s a demonstration of support for them, of people to acknowledge the incredibly difficult year that they’ve gone through, to let them know that their daughter is still important to us.”

Helmkamp said that while universities are places of great hope, it’s impossible to isolate them from the violence that plagues society. “So many instances of violence take the best of what we have to offer. I wish universities were different,” he said. “We do everything we can on campus to protect our students, to educate them on how to protect ourselves.” Madison police continue to focus on the search for Zimmerman’s killer, but no arrests have been made in the case.