You are here: Home / Politics / Govt / Superior mayor may run for lieutenant governor 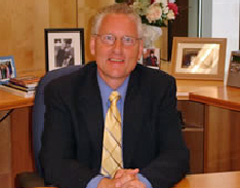 "We have gone on a tear, both in the state of Wisconsin and on a national level," says Ross, describing the spending priorities of politicians in Madison and Washington. "They seem to lack to the discipline to not encumber future generations with horrible debt."

Republican Ross, a featured speaker at recent Tea Party events in Madison and Wausau, says cuts in the proposed state budget are less than meets the eye. "There's six billion dollars of new spending," in the plan forwarded to lawmakers by Democratic Governor Jim Doyle, Ross says. "How is that cutting, and how is that being fiscally responsible? Especially in my community and communities all over Wisconsin where people are losing their jobs, and government is telling them they're living off this bare bones budget, but they're spending more."

Ross says he's traveled to 35 of the state's 72 counties to meet with local officials, but is still "several months away" from making the final decision about a campaign.