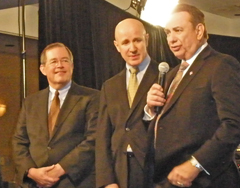 The four-term governor and former US Health Secretary Tommy Thompson is passionate about health care reform.

"…How we can fix and transform healthcare for all Americans. Healthcare is too expensive, it is not accessible enough, and it certainly does not covere the uninsured the way we should."

Appearing at a healthcare summit in Madison, Thompson says, "We have on a bipartisan basis to change health care from a disease system to a wellness system."

"Make it more affordable, more accessible, cover the 50-million-plus individuals that don't have health insurance, and do something about the 25-million people that are underinsured."

One panelist says there's been an explosion of people with chronic illness, which is where 75% of health dollars are spent.

Thompson says information technology is a huge part of the equation, referring to electronic medical records. And, Thompson notes, medical mistakes kill far too many people, saying e-prescribing would address that problem. Thompson lists Medicare as a big issue in desperate need of bipartisan support.

"Come together with the conclusion that healthcare in America is not as good as it should be … or can be!"