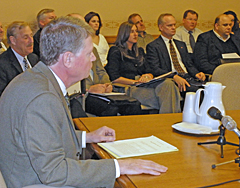 So, you don't like those "personal" phone calls from former presidents and other political types?

Even if you're on the state's No Call List, nonprofits and political calls are exempt. Voters are increasingly expressing their frustration to state officials, saying that with a recorded message, there's nobody to whom we can say "stop it."

"Consumers are somewhat tolerant of the first call, but when they get the second, third, and fourth on the same issue they want to tell somebody 'stop it,' and they can't."

Jim Rabbit with the Department of Consumer Protection understands the frustration, but worries about whether restricting such calls would be enforceable under the First Amendment.

State Senator Jim Holperin (D-Conover) says candidates in every political party will argue that they need this option available to them because it gets voters to the polls, but he doesn't like this tactic.

Holperin says using this method simply reverses the credibility a candidate has earned from constituents during the campaign.

"This technique and this strategy devalues everything that you do for the first 6-8 months of the campaign."

Holperin, the only Democrat to co-sponsor this Republican proposal (AB-93), says restricting these automated calls would help maintain the integrity of the electoral system in our state.

NOTE: An Assembly Committee on Consumer Protection at the capitol took up the issue of robo calls on Wednesday.