You are here: Home / Legislature / Anti-smoking crusade pays off 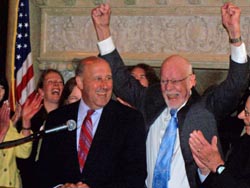 The signing of a statewide smoking ban Monday by the governor marked a proud moment for one Wisconsin lawmaker.

State Senator Fred Risser (D-Madison) has been fighting for the ban for decades, introducing the first version of the bill in the 1950s. While it's not the most important legislation he's ever worked on, the Madison Democrat says it ranks up near the top.

Risser says the bill addresses an important public health issue and the ban will help to save lives. He says it will also save the state money by hopefully encouraging more people to quit smoking.

The smoking ban, which covers bars and restaurants, takes effect on July 5th of next year.